Sparky wrote:kiwi, thanks for the link and info. in your post.

garyn, might want to look at "Gold Rush Alaska" series to see what you will have to do to get some gold.

There is another tv series, "Bering Sea Gold", which looks like a quicker and cheaper way to get gold. They suck it up from the sea floor. Well, the big barge has a huge back hoe to scrape it up, but that is big bucks. They find gold under the gravel off the coast near Nome. Turn over a big rock and there it is!

Sparky "Bering Sea Gold" is just about to start down here .... seems a fair amount of drama from the adverts but I love these shows for the fascinating insights into geology ... In an old book I have (and cant locate at present) .. there is a comment by the old Professor who it .. " if you fill 70 (?) [needs verifying] old kerosine tins ( think they were about 25 litres?) ... with black Iron sand ( just about the entire West Coast of NZ is Iron sands) taken from the bottom of the beach cliffs... you WILL recover 1 oz of gold .... interesting, I intend giving it a shot later in the year

I don't think anyone can produce gold, from whatever source, at a price that is lower that the asking price for the commodity. Any way you do it...

It'd be just as accurate.

But if you consider incoming objects, call them whatever you will, then the distribution of the field will be consistent with an incoming object.
Top

Re: Earth - tectonics and geology

We just had a fairly major solar event, and if the sun is connected to the galactic flow and the sun behaved as it did, is it too far out to assume that the Earth also moved? Did the entire system shake, leaving no trace of relative motion?
Top

Re: Earth - tectonics and geology

I think that geology is on the verge of a major paradigm shift, to
use the fashionable term, comparable to that in physics between
1895 and 1905. Geologists today subscribe almost unanimously to
what W. K. Hamblin has called a “master plan,” the theory of plate
tectonics. The three essential mechanisms of plate tectonics – sea-
floor spreading, subduction, and transform faulting – have in fact
been confirmed by so many independent lines of evidence that we
can consider them observed phenomena, at least in and around the
ocean basins. Plate tectonic theory is called upon to explain, directly
or indirectly, almost all aspects of terrestrial geology above the level
of the crystal lattice. Even metamorphic petrology, in particular the
new field of ultra-high pressure metamorphism, invokes phenomena
such as continental collision to explain how rocks recrystallized 150
kilometers down are brought to the surface.
I think this is a mistake. We now know, from space exploration,
that bodies essentially similar to the Earth in composition and struc-
ture have developed differentiated crusts, mountain belts, rift valleys,
and volcanos without plate tectonics, in fact without plates.
Furthermore, we now know, thanks partly to remote sensing from
space, that the Earth’s crust can not realistically be considered a
mosaic of 12 discrete rigid plates. For these and other reasons, I dis-
agree with certain aspects of plate tectonic theory, as will be
explained in the text.
Is the Earth fundamentally unique? Most geologists think it is,
and consider the discoveries of space exploration to be interesting
but irrelevant to terrestrial geology. The basic objective of this book
is to show the contrary: that the exploration of space has also been
the exploration of the Earth, and that real understanding of its
geology is just beginning now that we can see our own planet in
almost its entirety, and can compare it with others.

Diamonds of the gods?

Lookinkg for EU science fundings? Let's become diamond prospectors! Perhaps when we show them where is the money, they'll take us seriously...
Top

Re: Diamonds of the gods?

Those are some powerful plasma pinches. Who knows how potent the current and magnetic field was in that region.
Top

Re: Diamonds of the gods?

There is the Crater of Diamonds State Park in Arkansas about 200 miles from where I live. I think you pay a $5 fee to find diamonds and you can keep what you find. Help yourself.
Best,

Mount Warning & the Tweed Valley, NSW. To me the general morphology looks like uplift rather than erosion. The parabolic shapes around the peak and aligned ridges shown attached lead me to doubt the erosion idea in favour of something more organised...

BOOM! looks like discharge center or area especially with the 'tail' that is the river going to the gold coast and all that electrically created sand. love the mountain ridges (lichtenberg) surrounding it to the west and north and gentler to the south

Mount Warning! What a blast from the past for the earth and me. Climbed that bloody mountain years ago to be the first people to see the sunrise for that day. Torches ran out of batteries so had to climb it in the dark and nearly froze to death. Those were the days

Garry Maxfield wrote this Geological Anomalies – Wollangambie Crater which may be of interest to those from Australia if you want to speak to another EU aussie
Everything is Electric?
Top

I am no expert in geology and do not know if this sort of formation is well known or not, but I found these "spicules" quite interesting. How could they have formed? 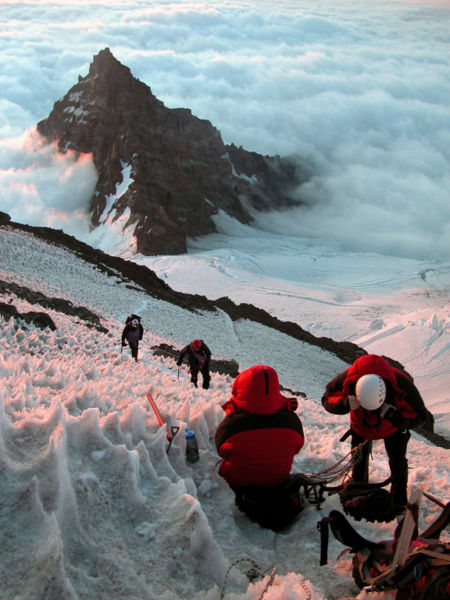 Could some electrical formation porcess be at work here? Isn`t there also a thread somewhere about some sort of electrical scarring on mountains (on a small scale)?
Top

Re: Ice "spicules" on Mt. Rainer

I've climbed Rainier 5 times, and also in Alaska and Peru.

What we are looking at in the photo are nieves penitentes (Spanish for "penitent snow").

From Mountaineering, The Freedom of the Hills, Third Edition:
"(They) are pillars produced when suncups are so pronounced that the cups intersect to leave columns of snow standing between the hollows. They are peculiar to snowfields at high altitudes where radiation and atmospheric conditions conducive to suncup formation are particularly intense, and reach their most striking development among the higher peaks of the Andes and Himalaya, where they may attain height of several feet, with consequently difficult travel. The columns often slant towards the midday sun."

But why suncups take the shape and size they do is unexplained.

I did not find any references to Israel or Jordan that seemed to talk about EDM on this forum, so I will mention that using google maps (terrain or satellite) if you look at the Dead Sea, immediately east you can see canyons that look very much like the Grand Canyon in the USA (much smaller of course).

These canyons have the classic EDM look. Again, very similar to the Grand Canyon.
Top

Velikovsky wrote about the Dead Sea.


The Dead Sea region was the scene of an interplanetary electrical discharge when a powerful electrical spark leaped down from above or sprang up from the earth.

Yes, it must be EDM, as that gives a source for the salt.

MattEU wrote:BOOM! looks like discharge center or area especially with the 'tail' that is the river going to the gold coast and all that electrically created sand. love the mountain ridges (lichtenberg) surrounding it to the west and north and gentler to the south

Mount Warning! What a blast from the past for the earth and me. Climbed that bloody mountain years ago to be the first people to see the sunrise for that day. Torches ran out of batteries so had to climb it in the dark and nearly froze to death. Those were the days

MattEU just read your post, have formulated this blog post earlier today as a means for further discussion.

Users browsing this forum: No registered users and 15 guests