Earth Was a Moon of Saturn

oz93666 wrote:I think this tread has raised a number of points as to why the Earth could not have had Saturn as it's 'Sun' at one time, but for me the most powerful reason is this.
If Saturn was emitting enough light to sustain life on Earth then it would be very hot , and Saturn could not have cooled down to it's current temperature in a few thousand years. It would take millions of years. You cannot change these basic laws of physics. So the whole idea is a non starter. Next subject please!

I said on this forum, that I think that Saturn did not came as an "intruder" into the Solar system, but that Saturn - just like all the other giant planets of the Solar system - was "birthed" by our Sun.
That what I said was ignored, even though it is more logical to assume that Saturn was created, in the vicinity of it's current position(orbit), than to assume that it was created "somewhere far away", like Cardona and others who follow Cardona think.

If I am right, then maybe Saturn was in the past closer to the Sun, was even maybe at a distance from the Sun that is equal to today's Sun-Earth distance, or even closer.
In another words, I do believe that the Earth was a satellite of Saturn, but the energy that was responsible for the life on Earth, didn't come directly from Saturn, but had as it's source the Sun.
However, I also think that Saturn "transformed" the photons from the Sun into lower energy photons, because without that transform, the photon radiation would have been too harmful for life on Earth.

Something similar to this "Saturn function" we see with our Moon.
Namely the reason why the round Sun that we see is optically equivalent with the Moon, is because the Moon recycles on average HALF OF ALL CHARGE(photons) that come from the Sun.
And only after the Moon recycling process is completed, are the photons "sent" to the Earth(at the New Moon phase, but as you go closer to the Full Moon phase, photon recycling decreases until it reaches zero).
Top

I found this theory to be of profound note. It is quite possible that our current sun is actually Nibiru or Nemesis. The great cataclysm that scar-d mars and separated us from that configuration was the interaction between two separate systems, eventually leading to our current configuration trapped with the Sun. This could also imply that the previous golden age was completely dependent on that Saturn configuration and we will no longer experience that dynamic. If indeed a golden age did occur, does less gravity equate to more prosperity in life? I recall a discussion discounting a smaller earth if gravity was less, but they did not examine the possibility of gravity being less due to a larger body close by canceling out a portion with opposite force.
Top

I was thinking about Schumann resonance when I woke this morning. I wondered what the entire frequency range available to our planet would be under these circumstances. Perhaps this new frequency with our current Sun is the cause for the planet to be slowly becoming a desert and overall ice age melting.
Top

Was This A Trinary System?

In looking at the Saturn myth I can't help but wonder. Has it been considered the Proto Saturn did not drift here, but was a trinary companion "star" to this system? That during a long orbit it entered the charged state the Saturn Myth discribes, and when nearing the binary companion to Sol, Jupiter, the battle we understand via the myth then took place? I apologize if this has been asked. What does this group think?

Re: Was This A Trinary System?

Welcome to the forum. This is a great place to learn things.

I'm just an armchair fan with no advanced degrees, but I think part of the "Saturn came from outside" argument has to do with the axial tilt of Saturn and a few planets thought to have once been moons of Saturn.
Top

As a new reader, the EU has me fascinated. It rings true on a number of levels, including the way things go when old paradigms begin to die.

I'm especially interested in the earlier solar system, possibly including Saturn as an original sun. 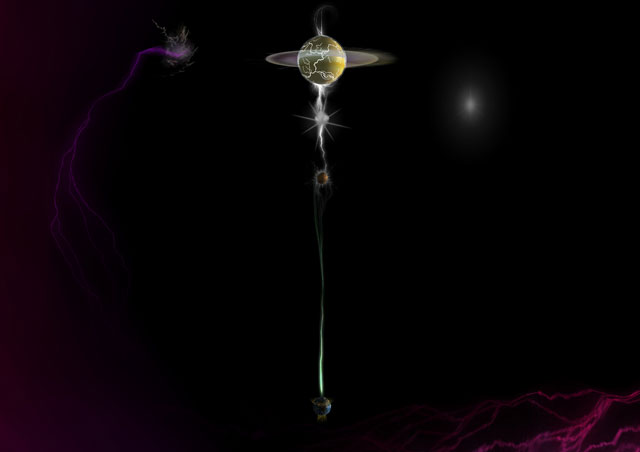 I have a question: Is there a reconciliation of ancient temperature records, http://wattsupwiththat.com/2014/12/15/p ... to-todays/, with a Saturnian climate, presumably with the Earth in tow to a brown dwarf?
Top

Re: Saturn sun and climate records

Generally purple dawn would be a warmer more moist climate, the climate as it was before the ice ages. When saturn approached Sol the radical temperature changes occurred.

Re: Was This A Trinary System?

Ginsburg wrote:In looking at the Saturn myth I can't help but wonder. Has it been considered the Proto Saturn did not drift here, but was a trinary companion "star" to this system? That during a long orbit it entered the charged state the Saturn Myth discribes, and when nearing the binary companion to Sol, Jupiter, the battle we understand via the myth then took place? I apologize if this has been asked. What does this group think?

This assumption isn't any worse than any other, I think.

Concerning the myth itself: it is often highlighted as the battle of "new" god (Jupiter) against the "old" one (Saturn), but the exact role of the Sun is kind of unknown here. Would be nice to contemplate on that.
Top

Here is an article by Ian Stewart:

Wandering in the Heavens: How mathematics explains Saturn's rings

Farther down the article I was rather surprised to read:


In the early solar system, the giants were closer together and millions of planetesimals roamed the outer regions. Today the order of the giants, outwards from the sun, is Jupiter, Saturn, Uranus, Neptune. But in one likely scenario it was originally Jupiter, Neptune, Uranus, Saturn. When the solar system was about 600 million years old, this cosy arrangement came to an end. All of the planets’ orbital periods were slowly changing, and Jupiter and Saturn wandered into a 2:1 resonance – Saturn’s “year” became twice that of Jupiter. Repeated alignments of these two worlds then pushed Neptune and Uranus outwards, with Neptune overtaking Uranus. This disturbed the planetesimals, making them fall towards the sun. Chaos erupted in the solar system as planetesimals played celestial pinball among the planets. The giant planets moved out, and the planetesimals moved in. Eventually the planetesimals took on Jupiter, whose huge mass was decisive. Some were flung out of the solar system altogether, while the rest went into long, thin orbits stretching out to vast distances. After that, it mostly settled down.

Does this not somewhat echo Symbols of an Alien Sky?
www.maxphoton.com
Lighten Up!
Top

Yes, I personally think the people are aware of the Thunderbolts' ideas.
Although I'm not sure it could be proven in any way.
But the core of this text seems to reproduce the so-called Nice model, which was developed around 2005.
Top

Paladin, thanks for the lead to the Nice model. I was curious to what Stewart was referring to.

[As an aside, for you math enthusiasts out there, Ian Stewart's popular mathematics book Concepts of Modern Mathematics (Dover) is worth considering. The price is right too.]
www.maxphoton.com
Lighten Up!
Top

Our solar system may be composed of planets from not two, but three solar systems! Saturn, Mars and Earth have the same axial tilt, and Uranus and Pluto/Charon both lie on their side. In fact, Pluton/Charon has a whole bunch of moons all with an axis of rotation pointing toward the Sun.

So maybe our Sun gobbled up Uranus/Pluto/Charon, then gobbled up Saturn/Mars/Earth (and Saturn gave birth to Venus in the process)

Maybe Saturn and Uranus have prominent rings because they were both previously stars?
Top

I have to laugh at the fine detail presented in Stewart's story. While I love a good mathematical model as much as the next

, I do keep try to one eyeball on the model's range of applicability; yet this one seems to go on without limit. When Stewart says "chaos erupted" but then goes on to make predictions beyond that, he contradicts himself: chaos is not predictable. (I'm surprised a mathematician even said that.)

Regardless, it is interesting to see published the notion of the planets changing position over time. And if planets have different voltages then such rearrangements would imply electrical effects.
www.maxphoton.com
Lighten Up!
Top

Here is a nice movie of the Nice Model.

(I wonder what that cost?)

Imagine what a crap-shoot it is picking the initial conditions, simplifying assumptions, boundary conditions, etc.
www.maxphoton.com
Lighten Up!
Top

After watching Symbols of an Alien Sky parts 1-3, I think I missed something. Can someone direct me to a 3D model of the planets at the time of the polar alignment of Saturn, Venus, and Mars?
I can't seem to picture a model that would allow this. How can these three planets line up directly on Earth's axis?
I'm not trying to cast doubt. I'm very enthusiastic about the information presented.
Top
Locked
359 posts