Conclusions
Various experimental techniques have been employed in this study in an attempt to characterize the
microwave-excited plasmoid ejected by localized microwaves from silicon-based substrates in
atmospheric pressure environment. Each of these methods is limited in certain aspects, but their
ensemble provides a better insight of the fireball properties.
The fireball studied here is characterized as a partially ionized complex (dusty) plasma, as indicated
by the low electron density calculated (ne ~ 3 × 1018 m−3), the low temperatures measured (<1 eV), the
lack of spectral atomic ionization lines, and the presence of nanoparticles (nd ~ 1015 m−3) forming the
dusty plasmoid. These particles made of the substrate material seem to agglomerate into larger
structures in the micrometer scale. The effect of the fireball’s self-impedance matching tends to
maximize the absorbed power and to maintain its buoyancy. The dielectric permittivity of the buoyant
plasmoid is attributed both to the free electrons and to the charged dust particles. The chemical
reactions and combustion processes are evidenced by the radical production within the plasmoid.
These laboratory fireballs resemble natural BL, also in the aspects of aggregation and oxidation of
silicon micro-particles (e.g., [44,45]).
These findings, although requiring further studies, may advance the multi-disciplinary understanding
of the BL enigma. Beside the scientific aspects of the plasmoid and BL studies, derivatives of this work
are considered for applications, such as direct conversion of solids to powders in air atmosphere [13],
microwave induced breakdown spectroscopy (MIBS) for material identification [26], ignition of
thermite reactions [48], environmental applications of the fireball UV and radical emission [29],
developments of nano-battery concepts [23], micro-sphere production techniques (e.g., for optical
applications [49]), and microwave enhanced combustion processes.

Interesting study, especially the images of the produced spheres

The illusion from which we are seeking to extricate ourselves is not that constituted by the realm of space and time, but that which comes from failing to know that realm from the standpoint of a higher vision. -L.H.
Top

https://www.youtube.com/watch?v=4-3ZmNF35sw
before 35minutes they show some amazing high speed camera footage of sprites. Is it just me, or do sprites seem to enter the atmosphere like so many grains of meteors and travel down toward the planet? As opposed to them being an upward effect of lightning. I wonder if this is CME material actually bombarding our planet! The lightning is the material penetrating another, more inner layer of the electromagnetic shell and discharging with-in.
Top

Image of lightning from space

Notice in the lowest image there are two circles, side by side. Above them is a circle in the center of the discharge pattern. Above and to the left are two more areas, side by side.

Isn't this consistent with the flow of electrical force in a Birkeland current (in cross-section)? Two twisted pairs, becoming one just before becoming a single stream.
Top

Re: Image of lightning from space

What a gorgeous image. Thanks for posting the link.
Top

What have we been stating -- e.g. in the case of Venus -- regarding the possible surface reaction of N towards C by means of Fe as catalysator? Japanese scientists have now found the proof what lightnings can achieve in Earth's atmosphere.

For the first time, scientists have witnessed lightning triggering nuclear reactions in the atmosphere, confirming a hypothesis dating back almost a century...

Lightning, particularly the very energetic -ray flashes, can theoretically generate radioactive isotopes through the interaction of relativistic electrons with atoms and molecules in the air. Some weak observational evidence for this was recently claimed. Teruaki Enoto and collaborators report observations of a coastal thunderstorm in Japan on 6 February 2017, in which they see a clear signature of positron annihilation associated with -ray flashes, combined with -rays arising in the de-excitation of nuclei excited by neutron capture... 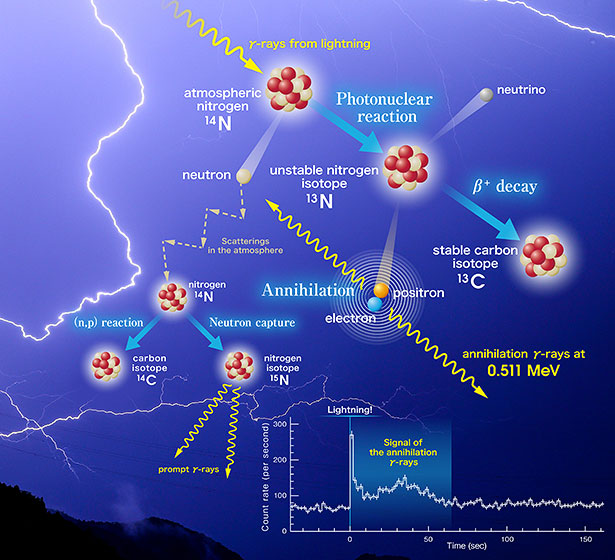 See the above arxiv-Link in the headline or look here for the paper:
https://www.nature.com/articles/nature24630

its no surprise that lightning produces light spectra in different wavelengths including gamma. How exactly did they measure the 0.511mev on the lightning bolts?

seems like they just detected the gamma rays and filled in the blanks to get their money or whatever.
its all lies.
Top

Webbman wrote:its no surprise that lightning produces light spectra in different wavelengths including gamma. How exactly did they measure the 0.511mev on the lightning bolts?

seems like they just detected the gamma rays and filled in the blanks to get their money or whatever.

They took the data from 4 stations at a power plant during a thunderstorm in February this year. Those four detectors were located 0.5–1.7 km away from the place of the discharges, and they simultaneously recorded an intense radiation lasting for ∼200 ms which was analysed, along with the sub-second decaying radiation:

From the pre-paper at arxiv:

...The subsequent initial burst quickly subsided with an exponential decay constant of 40–60 ms, followed by a prolonged line emission at ∼0.511 MeV, lasting for a minute. The observed decay timescale and spectral cutoff [see figures at pg.17, 18, 19] at ∼10 MeV of the initial emission are well explained with deexcitation gamma rays from the nuclei excited by neutron capture...

Figure 3: from Page 17
Count-rate histories during the annihilation signal. a, b, The gradient coloured maps show the detected counts in a unit time and energy (counts/s MeV) on the two-dimensional histograms of time (abscissa, 1-s binning) and energy (ordinate) for the detectors A (panel a) and D (b). The horizontal white dashed-line indicates 0.511 MeV. The dominant backgrounds above and below 3 MeV are cosmic-ray induced components and radiation from environmental radioactive nuclei, respectively.

Figure 4: from Pages 18/19
Gamma-ray spectra during the prolonged annihilation signal. Panels a and b are for the detectors A and D, respectively. The background is subtracted from the same time span of Fig. 2. The detector response is inclusive. The error bars are in ±1σ. See the panels c and d in Fig. 3 for the event-accumulating time regions for the detectors A and D, respectively. Red lines show the best-fitting empirical models consisting of a Gaussian line profile plus a power-law continuum, the latter of which represents the Compton scattering component from the former (see also Methods “Positrons and annihilation” for a physically-based model).

did you ever think that an electron simply shape changes into a gamma emission and that no mythical positron is required?

wouldn't that be the simplest explanation?
its all lies.
Top

Webbman wrote:did you ever think that an electron simply shape changes into a gamma emission and that no mythical positron is required?

wouldn't that be the simplest explanation?

The simpliest explanation ist that what Wal suggested in the case of Venus:

At Venus it seems that the Fe from the surface acts as intermediate as the CO interacts in the hot environment with water vapour and becomes CO2. Similar as it is used in steel industrie's coke plants for extracting Hydrogen from Water. That H dissipates into the Venus atmosphere and gets "lost" in space.

B.t.w., that's why there's so many Deuterium in the Venusian atmosphere.

Louis Kervran explained this about 100 years ago.

I just linked that paper to demonstrate that there finally is now "scientific proof" of what has been clear for us all the time.

The analysis of what really happens is another point. Me too thinks that the positron-explanition isn't the final word.

Actually, this needs explaining. The only things that can vibrate fast enough to produce gamma rays are the protons within the nuclei of atoms. So gamma rays are evidence of nuclear reactions (fission and/or fusion), where the loss or gain of a proton disrupts the balance between the electric & strong nuclear forces within the nuclei, resulting in extremely rapid oscillations. Normally, electric currents, in solid conductors or in discharge channels through gases such as the atmosphere, don't generate gamma rays. There are a variety of types of emission mechanisms in lightning, including electron uptake, Bremsstrahlung and synchrotron radiation, etc. But none of those are gamma rays. So something has to initiate nuclear events, before there will be gamma rays to initiate other nuclear events, such as the chain reactions described in the cited paper.

The likeliest candidate for the first nuclear event is relativistic electrons slamming into stationary atomic nuclei at the ends of the stepped leaders. This will instantaneously create the temperatures and pressures necessary for nuclear events. Concentrations of fusion by-products, such as greater CNO abundances, as well as free neutrons (which decay within 15 minutes outside of an atomic nucleus), have been detected, here on Earth as well as after arc discharges on the surface of the Sun.

No need for positrons.

Give a man a fish and you feed him for a day. Teach a man to fish and he'll spend the rest of the day sitting in a small boat, drinking beer and telling dirty jokes.

Good morning. Has this discovery something to do with neutrino emission and oscilattions, alleged by mainstream science as a confirmation of core nuclear reactions?


ConscioussNutshell wrote:Good morning. Has this discovery something to do with neutrino emission and oscilattions, alleged by mainstream science as a confirmation of core nuclear reactions?

In contrast to popular belief, lightning often does strike twice, but the reason why a lightning channel is 'reused' has remained a mystery. Now, an international research team led by the University of Groningen has used the LOFAR radio telescope to study the development of lightning flashes in unprecedented detail. The results were published on 18 April in the science journal Nature.

Charge remains in the channel!


Their work reveals that the negative charges inside a thundercloud are not discharged all in a single flash, but are in part stored alongside the leader channel at interruptions, at structures that the researchers call needles.

Sounds almost like signal transport in nerve cells. And - it's "pulsed".

"This finding is in sharp contrast to the present picture, in which the charge flows along plasma channels directly from one part of the cloud to another, or to the ground," explains Olaf Scholten, professor of physics at the KVI-CART institute of the University of Groningen. It was never possible to observe the needles before the "supreme capabilities" of LOFAR, adds his colleague Dr. Brian Hare, first author of the paper. "These needles can have a length of 100 meters and a diameter of less than five meters, and are too small and too short-lived for other lightning detections systems."