Re: Mars photos with channel between "lakes"

In the new study, the researchers analysed the depressions and discovered a series of small sinuous channels that connected them together. The researchers say these channels could only be formed by running water, and not by ice turning directly into gas.

And they liken these 'lakes' to permafrost marshes in Alaska, suggested that water ran from the high point lake to the low point lake. However, the high point lake apparently has a deep end farthest away from where the sinuous rille... I mean- sinuous channel connects. Also, the 'channel' is apparently as deep as the lake is on that side. How do they presume that the water confined itself to that one narrow 'channel' to drain the whole lake? Especially when it appears that the 'deep end' was on the other side of the lake from there?? There's no terrain to confine a drainage stream to a particular path so that it could carve the stream to the depth of the high point lake? Why didn't the lake just exceed it's banks and recede again?

This article is just the epitome of wishful thinking and flights of fantasy.

As for 'convincing people', well... how many people will believe that a lakebed was carved by a giant electric tornado to begin with? :\

If both of those two criteria are true, I think you have pretty much proven that it was created electrically, and not by any running water.

The Craters are electric

you show an image of a triple crater in a straight line, and there is a reference underneath to the original NASA caption: "[T]hree aligned meteor impact craters on the floor of a much larger crater in the Noachis Terra region. The craters may have formed together from a single event in which the impactor (the meteor) was broken into three pieces."

I am talking about that crater with a geologist in another forum, he has expertise in impacts and I am trying to get him to consider the Electric Universe theory, and he would like to find it in a map try to estimate it's parameters etc.

Could someone here give me the Mars co-ordinates of the triple crater?

(I would post the pic here but I don't know how, how do I tell it where to find the image?)

Is it possible
Top

TGD
There are no other dogs but The Great Dog
Top

When I did a google image search it only came up with this site..

Hi TGD,
Ask your geologist friend to consider that there seems to be no ejecta from these "impact" craters. Note the rather flat bottoms, except for the "dune" markings.

It pains me to see them thrashing around for a plausible explanation. 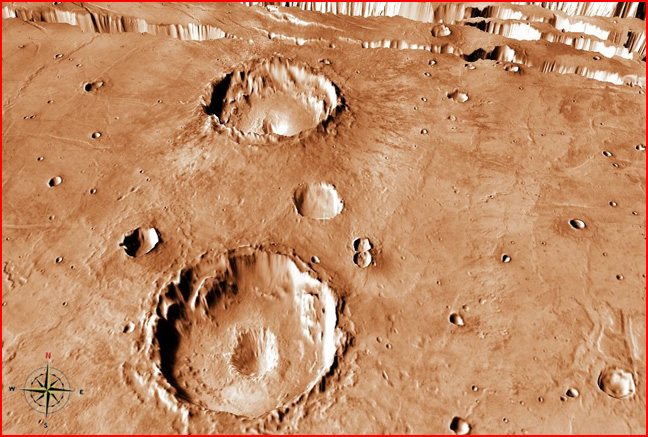 from:
http://www.thunderbolts.info/webnews/12 ... raters.htm
In order to change an existing paradigm you do not struggle to try and change the problematic model. You create a new model and make the old one obsolete. -Buckminster Fuller
Top

In addition to the above, a TPOD on the subject:
Bulls Eye Craters

The probabilities of the occurrence of twin bulls eyes presents a problem for impact theory.

I was gonna post something about electrical discharge machining, but I didn't want to get Plait monologuing again...

Yeah, "impact rebound" just doesn't seem to be happening here, does it? But I still can't quite see how EDM can be invoked for both excavational and depositonal features, ie lichtenberg mlouintains and valley structures, as well as for both central mounds and central dents in craters? Doesn't survive the cut of the razor for me.
Truth extends beyond the border of self-limiting science. Free discourse among opposing viewpoints draws the open-minded away from the darkness of inevitable bias and nearer to the light of universal reality.
Top

but i agree with you about the puzzle of what does what, it would be good if Wal or some one else could really explain or do a video on how our planet gets terraformed by the EU

from what i can work out some of our craters or the largest flat depression areas found in or beside mountains are discharge craters but caused by the earth discharging and not by another planet doing EDM.

which goes along with something else i am starting to consider, is the earth the power for a lot of these events and not the other planets? are we a power house when compared to other rocky planets? other planets or objects getting closer may trigger the events (could they even be attracted to the earth) but the earth provides the energy

examples are tunguska and also the meteorites that hit jupiter. i can believe that those objects had that much energy so they trigger the discharge from the planet. we get craters jupiter gets big holes in its clouds.

i guess this has been mentioned elsewhere but i dont remember reading or understanding this from the videos, books and tpods?

if its the earth discharging then it could explain why you get bulls eyes craters, if the discharge is from within the planet it could release through the same spot again
Everything is Electric?
Top

mharratsc wrote:I was gonna post something about electrical discharge machining, but I didn't want to get Plait monologuing again...

I *did* post something about electrical discharge machining earlier today, and got their customary "pending review" notice when I hit submit. As of Aug 03, 10:20 PM Central time my post has yet to show up in the comment section. I wonder if it will? I'm not willing to cry foul until at least 24 hours have passed, but I can't help but wonder if it has been flushed.
Shelgeyr
Sometimes I feel like a tiger’s got my leg...
Top

It's there now, Shelgeyr, well done!

Cheers, Dave.
"Those who fail to think outside the square will always be confined within it" - Dave Smith 2007
Please visit PlasmaResources
Please visit Thunderblogs
Please visit ColumbiaDisaster
Top

Unfortunately, Shelgeyr's comment is four days after the fact and, judging from the caliber of most of the other comments,

I doubt if most visitors/posters bother to read that far down the list. It's likely that the regulars have already moved on to some other item they no nothing about, with which they can hone their banal sophomoric efforts at being clever.

Although, if even one reader is enticed to look further into EU theory, then I guess it's worth the effort.

Plus, if it causes Phil-the-Shill a bit of discomfort, well, that's a bonus.

It's all about perception.
Top

Thanks, guys! Yeah, I came in at comment #95 - a tad late to the party - but I'm still pleased as punch it showed up at all. Someone must be slipping!
Shelgeyr
Sometimes I feel like a tiger’s got my leg...
Top
Locked
137 posts